skip to main | skip to sidebar

i am (virtually) moving :

So I'm taking the plunge and moving to WordPress. I expect to have the personal blog continue, plus perhaps two other projects over there. It all depends on how ambitious I'm feeling. And whether I suddenly have a long lost rich uncle that has set up a trust in my name.
Posted by Christopher1974 at 21:49 3 comments:
Labels: ch-ch-changes

communists have the better designers :

The only conclusion to draw from "terrorist organization logos" is that communists make the better designers. [Link via Kottke]
Posted by Christopher1974 at 10:24 No comments:
Labels: communists, design criticism, trends

Maeda reminds us that being a dilettante is both rewarding and not easy.

When you're green you grow.

When you're ripe you rot.

Posted by Christopher1974 at 14:39 No comments:
Labels: dilettante, excuses, growth

Today, thanks to the many-to-many communications that are possible in this Web 2.0 world of blogs and social networking, it's very easy for schlock marketing — and as such, the products it pushes — to gain an air of legitimacy. How? Easy: Just start a discussion. By engaging in the debate on a particular subject, both sides in the debate implicitly acknowledge that the subject is worthy of debate; and when one side of a controversy is the side that might ordinarily live on the fringes, the debate works to the advantage of that side regardless of the outcome. That's because all of a sudden, the fringe side of the debate — the voices and positions that had once rightly been relegated to the periphery — gain mainstream recognition. (This particular condition has been observed in the case of the whole "Intelligent Design vs. Evolution" matter, where evolutionary scientists are concerned that engaging in scientific debate with creationists dignifies the creationist position as something worthy of being argued about.)

Further, it's very easy for the purveyors of schlock-marketed products to change the character of the discussion for the worse. Instead of a reasoned back-and-forth which brings out the best of what our socially networked world offers, there frequently results a shouting match, in which he who yells the loudest wins, and in which anyone with a viewpoint at odds with that most loudly expressed is branded a hater, or is labeled as having an agenda, or both.

This quote is about software marketing. But it might as well be about the entire pulbic debate at this point. Particularly politics, but any civic debate, really.

I've noticed that the comments, especially the comments at newspapers and other widely read sites, tend to devolve into the worst wing-nuttery. And I think there is a feeling by some that we need to engage these nuts in a debate. Even if these folks aren't either thank tank operatives or are just kool-aid drinking dittoheads. It doesn't matter. The purpose isn't to reason, it's to stear the debate off course so that people forget what the original topic is and a new meme is introduced into the discourse in general.
Posted by Christopher1974 at 16:19 No comments:
Labels: engaging others, politics, strategy

To this post about ImEq’s Rachel Tiven on Bill O'Reilly, and the “killer answer” to the fraud question. I said:

The killer answer is that fraud is a problem with immigration, but that’s its much more likely to be a case with immigration between opposite sex couples — by the numbers (there’s more of them) and social stigma. But these types of killer arguments don’t work, because at the core, they don’t want arguments. They want to be right. How many times have you heard that gay people will ruin the institution of marriage? Despite the fact that straight couples have been doing a fine job of that on their own for centuries? Fraud is a red herring brought up people who do not see us as completely human but want to have an argument that sounds politically correct. If they could speak their minds, they would just tell us we don’t count. Is it time for the revolution yet? I’m ready.

And I meant it. The longer I’m in DC, the closer I come to overthrowing the government. Are you with me?
Posted by Christopher1974 at 21:42 1 comment:
Labels: anarchy, and the revolution will be commented on, gay rights, immigration 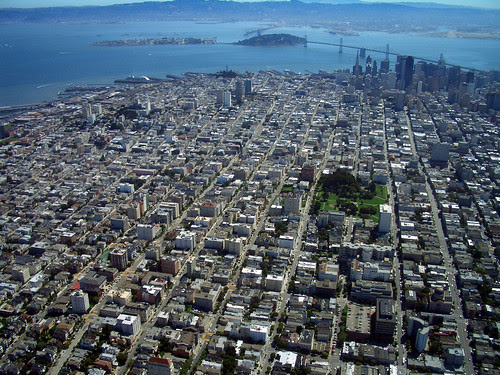 I don’t know what or who Telstar Logistics is, but its photostreams at Flickr are amazing. The above is from Low Altitude San Francisco.

I often argue that Universities are the biggest losers in the same-sex civil marriage debate (aka gay marriage). If the creative and educated classes leave for other countries (over same-sex immigration) or other states (for benefits and marriage), the Universities which have a seemingly higher percentage of same-sex couples are particularly hurt in the already competitive marketplace for top-tier educators.

But do Universities also stand to loose from alumni?

Slate makes a case (however ever obliquely — I’m reading between the lines here) for stable, child-filled families:

Alumni with kids are 13 percentage points more likely than alumni without kids to give in any year. The tendency to give rises slowly—by three more percentage points total—through kids' early teens. At about age 14, as mom and dad see their kid's algebra and composition grades, they decide whether he or she will apply to the alma mater. If they decide against, then they need not give extra to grease his way in. But if the kid is legacy material, then the parents might feel a need to show some generosity to Anon U.

I didn’t say this was exact. But it’s a pretty, um, straight line from alumni with families (stability, kids!) are more generous donors. And yet too often, Universities (I’m looking at you dear old U.Va.), sit on the sidelines in this debate.
Posted by Christopher1974 at 12:56 No comments:
Labels: benefits, living better, same-sex marriage, social change, stability
Older Posts Home
Subscribe to: Posts (Atom)